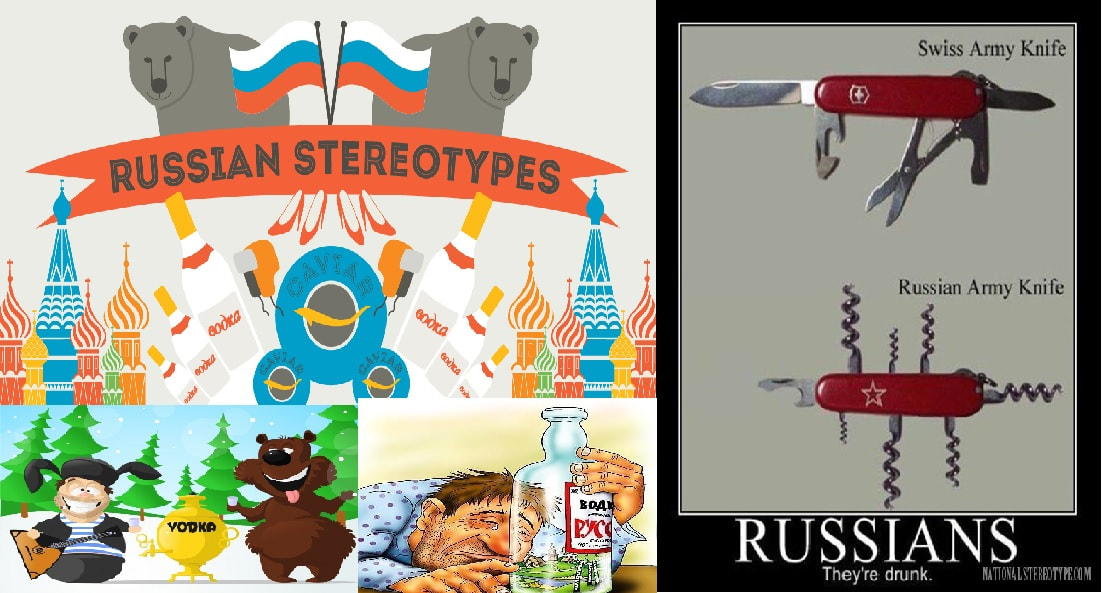 Have I ever been a subject of imposed representation?

Yes. At first my answer was no. I could not come up with a single time when I was addressed or treated in a way that was obviously based on a misrepresentation. However, after some reflection, I realized it happens all the time. I never give it much thought, because I rarely pay attention to what people think of me, and the fleeting moment of annoyance that I experience is never worth more than that – a moment.
I was born in Russia. In fact, I was born in Siberia. When I tell people that, they inhale sharply and comment on either how I should consider Canadian winters mild, or how I am probably an experienced Vodka drinker. I don’t drink. People have a very difficult time accepting that statement from me. I find myself arguing, and inevitably ruining either moods or even relationships because I would dare to refuse alcohol. For me though, it is simple... I just don’t like it. The older I get the more difficult it is for me to explain it to people around me.
Most people, who know me well, know that I do not drink, and when in conversation with those who don’t know that they will often call me a “bad Russian” or something to that effect. I have learned to disregard that, however, I did do my research and made sure that if I ever had to defend myself in a situation like this, I would be equipped with some hard facts which discredit the accepted stereotypes in regards to Russian drinking. I found it a little interesting, however, that even when I share my information with people backed by creditable sources, they still do not believe me.
How does the “Westerner” see “the Russian”?

There is an abundance of Russian characters in TV shows and Hollywood movies, the majority, if not all of them, displaying the same general character traits. If one were to use the idea of the glasses from the movie “They Live” and put them on to look at the Russian characters in the media, they would see a list of adjectives such as mentally unstable, ruthless, extremely violent, alcoholic, etc. The trend of portraying Russians in a negative light stems from the propaganda associated with the Russians during the cold war, but it continues on now. With the exception of those who happen to be ballet dancers, the characters have progressed from the Russian always being a crooked, cold hearted and calculating spy to a crooked and violent debauchee or a prostitute, if they happen to be female. In either case, there is very little good or inspiring about these types of characters. The negative stereotypes are continuously rebuilt for the post Cold War generations because, “the media are a pivotal vehicle through which the social is continually recreated, maintained, and sometimes (only in this case very rarely) challenged” (Stack and Kelly, 2006, p. 9). The list of examples is quite long, but to name a few – Boris the Blade (Snatch, 2000), Alexei (Bad Boys II, 2003), Gangster Gennady (Limitless, 2011), etc.
​          This is not to say that the Russian character in the Hollywood movies must be the complete opposite now that the Cold War is over and Russia is supposedly a democratic country. The current Russian politics are not endearing the country to the world, which is constantly reminded to those who watch the news. However, the borders were opened, and there are hundreds of thousands of Russian and former Soviet Union immigrants in the west now. The children of these immigrants are European, Canadian or American born and are growing up to become voting citizens of their countries. What they are seeing in the media is reminiscent of the kinds of labels the Reel Injun movie referred to, i.e. the “Noble Injun” or the “Savage Injun” when describing the way Hollywood portrayed the Indigenous People. Clear cut labels, easy to associate, and easy to remember, that make the children born here feel that they need to hide where their families had come from.
The social media is seeing slow changes now, where people who live in the West, try to assert their agency and create their own media to counter the negative image created by Hollywood. The Russian history and culture is old and abundantly rich, and people post poems, paintings, videos and translations of texts into other languages so that the world would learn more about the less popular side of the Russian character, and the diversity of the different peoples who were all members of the former Soviet Union. As Stack and Kelly phrased it, “In addition to challenging the mainstream... we need to look at alternative media outlets, which can provide counter‐narratives and (with a substantial enough audience base) can put pressure on mainstream, corporate media to diversify their content” (Stack and Kelly, 2006, p. 19).

​The Disney Princess image has definitely evolved over the past 100 years. Research shows that the princess is now less likely to be the damsel in distress, and more likely to go on an adventure, assume a leading position, be brave rather than meek, powerful rather than powerless and able to make her own decisions, rather than wait for someone to make them for her (Johnson, 2015). However, not all gender stereotypes have been addressed and the princess is still portrayed not only as beautiful, which is an essential attribute for being a princess, but also sexy (Wohlwend, 2008). In some cases it seems suitable and not at all out of place. For example, when Elsa sings her signature “Let It Go” and transforms herself into the Snow Queen the story is based on, her walk toward the audience, with hips swaying and the slit in her dress not unlike that of Angelina Jolie’s, it could almost be accepted. She had just come of age after and all had been crowned queen. She is an adult. Although, Johnson argues that it sends a “message that in order for a woman to find herself, she must become more sexualized and alter her physical appearance” (Johnson, 2015, p. 21). On the other hand, when the little Princess Sophia, who is but a child, is dressed in a horse-back-riding suit, and is given hips that sway as she walks, it seems completely unnecessary and out of place.

​Princess Sophia’s somewhat sexualized riding outfit only appears in a few episodes over the series, and is only one of the gender stereotypes that this seemingly progressive Disney Junior Channel show embraces and continues to reproduce. Aside from Sophia, who is by all accounts brave, wise, compassionate and a definite leader, the rest of the female characters in the show are given staggeringly simple outdated and stereotypical traits. The show is a part of the most recent “massive increase...in the amount of media directed at children,” and attempts to give Sophia the new and less stereotyped image of a princess (Stack &Kelly, 2006, p.6). In the process, however, it forgets her mother, her step sister, her friends and most other female characters in the show.

According to the story, Sophia’s mother, Queen Miranda, was a village woman, and a single mother, with whom the widowed king fell in love and married her, rescuing her from poverty, and moving her and her little daughter into a castle. She then makes no decisions in running the kingdom and is a classic example of a female character transformed from a “happy homemaker in waiting” to an actual homemaker (Wholwend, 2008, p.45). Sophia’s sister, Princess Amber, is a blond (coincidentally or not), not very smart but extremely narcissistic and vain who is everything a classic princess should be – beautiful, mannered, afraid of most things, and a little featherbrained. These two female characters are just two of the many examples of the very traditional gender stereotypes in the show and tend to counterbalance the more ‘masculine’ traits demonstrated by Sophia. With the majority of the female characters being weaker and in need of help and rescue (whether by a male character or by Sophia), these “juxtaposing ideas” tend to reinforce typical gender roles” rather than deconstruct them (Johnson, 2015, p. 27).
​“As children are likely to look up to Disney characters for years to come, it is critical that media tendencies to inaccurately portray princesses be further studied” (Gill, 2016, p. 107). Studying these tendencies could demonstrate how simple and subtle gender misrepresentation in such shows as Sophia the First is, and the effects it has on the very young girls who watch these shows and love and admire these characters. Although the children watching do interpret and reproduce what they see differently, it is still important that adults acknowledge these misrepresentations, and that “educators and their students...engage and challenge mainstream media as well as pursue opportunities to create alternative stories,” thus opening them to better, less stereotypes and more daring storylines (Stack & Kelly, 2006, p. 20).
Cited Works

Gill, I. (2016). Feminist Figures or Damsels in Distress? The Media’s Gendered Misrepresentation of Disney Princesses. Youth Scholars in Writing, 13, p. 96-111.

Johnson, R. M. (2015). The Evolution of Disney Princesses and their effect on body image, gender roles, and the portrayal of love (Unpublished doctoral dissertation).

Download File
The above PDF is my first ever attempt at making a comic. It was a fun game.......and could be a very creative way for students to complete projects. I can easily see myself using one of these and, what is more important, I can see my students using it too... AND having a blast.
Don't judge too harshly. It was my first EVER try. :)